All “peanuts” are from the genus “Arachis” and all of these originate from the center of the South American continent, a region that is predominantly tropical. This includes the most commonly known species that produces the edible nut, (Arachis hypogaea), and the forage types that are known as Perennial Peanut, Arachis glabrata (Rhizomal Perennial Peanut) and Arachis pintoi (Seeded Perennial Peanut or Pintoy). A pintoi had been tested by researchers in Florida many years, but no A pintoi varieties were ever released due to lack of seed for propagation. The University of Florida has released multiple varieties of A glabrata and these are excellent and highly recommended. Their only drawback is the cost and time required for establishment since A glabrata does not produce seed.

A pintoi (Pintoy) is similar to A glabrata in many respects, such as forage quality, and it is often difficult to differentiate above the ground. However, there are important differences between the A glabrata varieties and A pintoi in terms of tolerance to drought and cold and other factors of adaptation. Some of these differences are varietal within the species and some will be differences between the species. Most information available on the use and performance of Perennial Peanut in the southeastern US is based on the University of Florida’s A glabrata varieties, while in Hawaii and outside of the US, most information has been generated on A pintoi varieties. We have included background information here that includes the A glabrata varieties, but in reading these materials, one should ignore the information and projected costs of planting A glabrata and also keep in mind that other performance factors could vary significantly. The information provided here on A pintoi comes from Australia, Latin America and Hawaii and there are some tests that compare the performance of A pinoti to A glabrata, but not in the Southeastern US. Pintoy Seeds is currently testing its varieties with the University of Florida and expects to have better information on the performance of our varieties in the US. 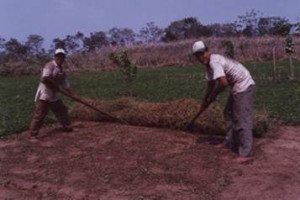 Perennial Peanut seed is very difficult to produce because the delicate seed grows 2-3 inches under the soil and must be recovered manually. Once the seed is harvested, it must undergo specific processes to ensure it will germinate and other processes to ensure it will maintain acceptable levels of germination over time. Today, Pintoy Seeds produces its seed with small farmers in Latin America and Southeast Asia. This seed production is a major source of cash for these farmers.

Pinoty Seeds has one variety available for sale today, PS144. This variety is low-growing and fast-spreading, making it ideal for landscaping. It performs very well planted with grasses in a pasture and can withstand heavy grazing. PS144 produces high levels of dry matter in the pasture, however, its low height makes it a poor variety for hay production and it should not be planted for this purpose. Pintoy Seeds is developing a new variety for hay production which it hopes to launch commercially in the coming years and the company will continue to develop other new varieties for the future.

Perennial Peanuts as a Cover Crop – University of Hawaii

Landscaping with Perenial Peanut; U of Hawaii

Use of Perennial Peanut as a Forage – USDA